What Does Snowy December in Northeast Mean for Rest of Winter? 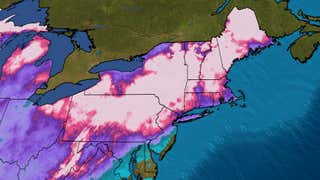 The Northeast had a particularly snowy December, but does that mean a snowier than average rest of winter is ahead there?

Gail dumped record snowfall on parts of the Northeast, including Binghamton, New York, and Williamsport, Pennsylvania, which both set all-time snowstorm records from this system.

More than two dozen locations from northern Pennsylvania into central New York, Vermont and New Hampshire measured at least 40 inches of snow from Winter Storm Gail. It was also the first storm to receive a ranking on the Northeast Snowfall Impact Scale (NESIS) since March 2018.

Fresh off of that December, many snow lovers might be hoping that this snowy trend will persist through the rest of the winter.

There are indications in the historical data for a few snowy December Northeast cities that seasonal snowfall might follow suit, but that's obviously no guarantee.

Take Boston for instance. Sixty-four percent of snowier than average Decembers there ended with a snowier winter altogether. On the flip side, the 2019 season ended with only about a third of the snow of a typical season after an above average December.

Philadelphia reported 6.6 inches of snow in December, more than double their average. December 2005 had that much snow and some, but a roller coaster rest of the season followed. Less than an inch of snow fell in the following January, but a foot fell in February. In the end, the season total was slightly below average.

December 2020 was the second snowiest on December on record a bit farther west in Pittsburgh. But the city has only measured less than an inch so far in January. About 65% of seasons that saw more snow than typical in December ended with above average seasonal snowfall there.

In Cleveland, the likelihood of seeing more snow than average for the season after a snowy December was much lower, at just over 40%.

January has not started off on a snowy note in most of the Northeast, but there is still time for a snowier pattern to return. The end of January and February is a common time of year for snowstorms in the Northeast. Snow there often continues into March.

(MORE: What Is Your Snowiest Month of the Year?)

There are signs of changes in the upper-level weather pattern that could increase the chances for snow in the Northeast during the second half of the winter, but whether heavy snow actually develops in the region remains to be seen.

It is also important to keep in mind that just one or two big snowstorms can result in a snowier than average season.

The mid-December snowstorm was a good sign for those hoping for a snowy winter, and historical odds are decent for a snowy recent winter.\