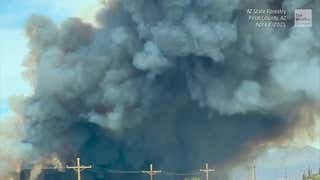 Residents in an small Arizona town that had been evacuated due to a wildfire were allowed to return home Saturday.

The fire had forced the evacuation of the entire community of Dudleyville, and and burned several structures.

Fire activity had picked up Friday afternoon amid warm, windy weather but the blaze moved away from the town.

The evacuation order, in place since Thursday, was lifted at 1 p.m. MST Saturday, according to the Pinal County Sheriff's Office. Residents were adviced to remain ready to leave again if necessary.

Flames have burned nearly 2 square miles and destroyed at least a dozen buildings.

"Crews are being assisted by a dozer to help secure southern edge of fire," the state Department of Forestry and Fire Management said in a tweet late Friday afternoon. "The fire continues to move south and away from Dudleyville."

Friday morning, officials said firefighters had stopped the forward progress of the blaze, dubbed the Margo Fire. At that point, it was 20% contained.

But dangerous fire conditions had been expected to return in Friday afternoon, with temperatures climbing back toward the 90s and winds potentially gusting up to 30 mph, according to weather.com senior meteorologist Jon Erdman.

Conditions are expected to remain dangerous for fires for days to come, with no chance of rain in sight.

Lisette Padula, a spokesperson for Pinal County where the unincorporated community of Dudleyville is located, told weather.com all residents were under the county's "Go" mode as of Thursday, which means to evacuate immediately. Padula said about 1,000 residents live in Dudleyville, and 73 residential buildings and one government building were threatened by the fire.

A shelter was set up at Ray High School in the nearby town of Kearny.

A portion of state Highway 77 was closed but has since reopened.

Padula said air assets were on the scene to assist in firefighting efforts.

The fire was burned through thick vegetation and sent thick, black smoke into the sky.

Dudleyville is about 100 miles southeast of Phoenix and 62 miles north of Tucson.

The fire comes amid extreme dry conditions. April 2020 to March 2021 was the driest such 12-month stretch in Arizona's history. Much of the desert Southwest is in extreme or exceptional state of drought, according to NOAA's U.S. drought monitor.

Enjoy The Outdoors With This Hammock (SPONSORED)

Those conditions are expected to persist in the coming months. NOAA's spring outlook, released in March, said the Southwest U.S. is facing its most significant spring drought since 2013.

Las Vegas Looks to Be First to Ban Ornamental Grass