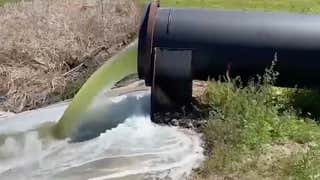 It may take weeks or months for the full effects of the Piney Point phosphate wastewater discharge on Tampa Bay to be known.

One of the biggest worries is what the nutrient-rich water is doing to vital seagrass beds in the bay along Florida's Gulf Coast, according to Maya Burke, assistant director of the Tampa Bay Estuary Program.

The Estuary Program, founded by Congress in 1991, and its partners, are responsible for protecting the quality of the bay and restoring it when an event does happen.

Millions of gallons of acidic wastewater, which contains phosphorus, nitrogen and ammonia, have been pumped out of the retention pond filled with water leftover from the manufacturing of fertilizer from phosphates. It also contains saltwater from a dredging project at Port Manatee and stormwater runoff and rain.

Tampa Bay is home to more than 200 species of fish, including redfish, mullet, sheepshead, snook and spotted seatrout. It provides a habitat for dolphins and manatees and tens of thousands of waterbirds, like herons and egrets.

Much of that life is sustained by seagrass beds.

"The nutrients in the water stimulate algae growth," Burke told weather.com. "Algae blooms can shade and kill off seagrasses."

Seagrass beds provide a nursery habitat for fish, crustaceans and shellfish, and the organisms that grow on the grass provide food for many marine animals and water birds. Seagrass beds also stabilize the sand on the bottom of the bay, add oxygen to the water and filter impurities.

Large blooms of macroalgae — big patches that look like lettuce or seaweed — not only block the sun, Burke said, they can also deplete oxygen from the water. Lack of oxygen can lead to fish kills.

Fish and other marine creatures are also sensitive to nitrogen, which is in the form of ammonia nitrogen, in the discharge, she said.

In addition to algae, any red tide that appeared could be made worse by the nutrients in the discharge.

The Estuary Program is coordinating the monitoring of water in the bay. It has established a baseline after years of keeping an eye on things and can quickly determine where water quality is diminishing, Burke said.

"The region has invested quite a bit to reduce nutrient pollution reaching the bay," she said.

Tampa Bay has generally met water quality standards in all parts of the bay since 2005. It has also seen gains in tidal wetland and freshwater wetland habitats since 1990.

That work and the growth in seagrass beds have made Tampa Bay more resilient to the current discharges, Burke said.

Once those discharges do end, she said, it will take many more years of work to clean up the Piney Point retention ponds to make sure another environmental disaster doesn't happen.

Burke said she is heartened that the community and officials appear to be committed to providing the necessary resources this time.

Las Vegas Looks to Be First to Ban Ornamental Grass