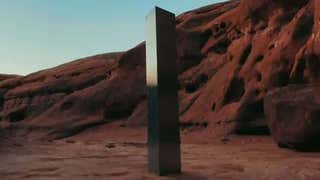 The mysterious metal monolith is gone.

The three-sided structure that was discovered earlier this month by Utah public safety workers was removed Friday night, according to the federal Bureau of Land Management’s Utah office.

"We received reports that a person or group removed it on the evening of Nov. 27,” the office said in a Facebook post.

A crew from the Utah Department of Public Safety and Division of Wildlife Resources was conducting a helicopter survey of bighorn sheep in southeastern Utah on Nov. 18 when it spotted the stainless steel structure rising out of the rock.

Crew members made photos and recorded video of the gleaming monolith.

(MORE: Photographer Captures Beauty and Danger on a Russian Lake)

The 10- to 12-foot triangle was embedded in the rock. There were no clues as to how it got there.

"Somebody took the time to use some type of concrete-cutting tool or something to really dig down, almost in the exact shape of the object, and embed it really well," Lt. Nick Street, a spokesman for the Department of Public Safety, told the New York Times. "It’s odd. There are roads close by, but to haul the materials to cut into the rock, and haul the metal, which is taller than 12 feet in sections — to do all that in that remote spot is definitely interesting."

There was some speculation in the art world that the monolith was the work of sculptor John McCracken, the Times reported. His son, Patrick McCracken, said his father, who died in 2011, had told him "he would like to leave his artwork in remote places to be discovered later."

The Bureau of Land Management said it did not remove the sculpture and it would not be investigating its disappearance because it considered the monolith to be private property.

"We do not investigate crimes involving private property which are handled by the local sheriff’s office," the BLM said in its Facebook post.