Colorado's Largest Wildfire Ever Gets Even Bigger; Fire Near Boulder Forces Evacuations 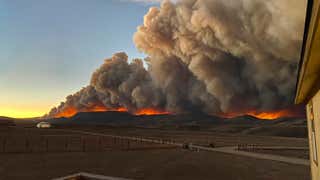 The largest wildfire ever recorded in Colorado continues to grow, but firefighting officials hoped to gain ground on Sunday.

Meanwhile, a fire in Boulder County forced nearly 3,000 people from their homes.

The Cameron Peak Fire, raging in the mountains west of Fort Collins and Loveland in Larimer County, had burned more than 317 square miles as of Sunday, according to an update from the National Forest Service. It was 62% contained. Calmer winds and higher humidity Saturday night helped firefighters, the Greeley Tribune reported.

"Back in The Retreat in Glen Haven, unfortunately, the fire did consume some homes overnight and through the day on Saturday, but thankfully it did not race through the subdivision," Larimer County Sheriff Justin Smith said in a Facebook post Sunday.

Smith had previously said it would be at least several days before more detailed damage assessments could be conducted.

Several rural areas around the fire remained under mandatory evacuation orders, and parts of the Arapaho and Roosevelt national forests, as well as portions of Rocky Mountain National Park, were closed.

The blaze has been burning since mid-August.

“The plan today is to try to hold the fire to the east,” Paul Delmerico, operations chief for the Cameron Peak fire said early Saturday, according to the Associated Press. “We're facing the same critical fire conditions today as we did yesterday."

Cameron added that it appeared the town of Estes Park would not be threatened by the fire as feared.

Officials evacuated more than 1,600 homes in the town of Jamestown, about 10 miles northwest of Boulder. Residents in parts of Lyons were told to be ready to evacuate.

The National Weather Service in Boulder warned of dense smoke.

Red flag warnings were in effect through Saturday night.

Dry conditions persisted in Arizona, where residents in a rural mountain community in Yavapai County were told to evacuate Friday night after a fire there moved toward several homes.

A small fire that erupted Friday afternoon in the San Francisco Bay Area threatened to burn the historic South San Francisco hillside sign in San Mateo County. Local news reports said two teenagers confessed to starting the blaze, which prompted some evacuations but was contained within a few hours.