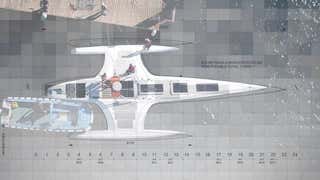 In September 1620, a wooden ship called the Mayflower set sail from Plymouth, England, with 102 people on board. Powered by the wind and human knowledge of navigation, it landed 66 days later in what is now the United States.

Fast-forward 400 years and a research ship powered by the sun and artificial intelligence launched from the same location, aiming to cross the Atlantic Ocean on the same path and conduct research on climate change, plastic pollution, ocean mammal conservation and other modern-day problems.

It's called the Mayflower Autonomous Ship, or MAS for short. There's not a single human on board – it's run by artificial intelligence, cloud computing and other technologies.

"Able to scan the horizon for possible hazards, make informed decisions and change its course based on a fusion of live data, the Mayflower Autonomous Ship has more in common with a modern bank than its 17th-century namesake," Andy Stanford-Clark, chief technology officer for IBM UK & Ireland, said in a news release.

The project is a partnership between IBM and Promare, a non-profit corporation and public charity that promotes ocean research and exploration.

But there are several ways real people can join in the adventure. The MAS website includes a live dashboard of the ship's location, ocean conditions and other data, as well as interactive games and other content. There's also a five-part docuseries that focuses on the MAS, how it was built and how it operates. Episodes 1 and 2 are already live, and Episode 3 drops Dec. 9.

The ship's command center, or AI Captain, and its mascot, Artie the Octopus, both have their own Twitter feeds.

Aboard the ship are six AI cameras and more than 30 different sensors, which identify hazards like other boats. Data from The Weather Company helps the MAS chart its route and avoid dangerous weather, critical for any ocean journey, whether manned or not.

Designed to work in tandem with scientists to gather ocean data, the MAS will contribute to research in several areas, including climate change, global warming and weather.

"Autonomous ships, if they can roam around the oceans and be feeding back live information such as the salinity, profile of the currents and the sea surface temperatures and the waves and the swell and things like that and the above sea weather, that’s going to help us understand in the short term what’s going on," according to an interview in an upcoming episode of The Uncharted podcast, dedicated to the MAS and weather. "And then we build a bigger picture and just try and learn what the impacts are."

The ship is a trimaran, meaning it’s built on three hulls – one in the middle and two that serve as outriggers. It measures 49 feet long and 20 feet wide, and can travel at a top speed of about 10 mph, powered by a solar-driven hybrid electric motor.

It's one of the first ever designed to operate without any direct human intervention.

"The Mayflower needs to sense its environment, make smart decisions about its situation and then act on these insights in the minimum amount of time – even in the presence of intermittent connectivity, and all while keeping data secure from cyber threats," Rob High, vice president and chief technology officer IBM's Edge Computing, said in an earlier news release.

The MAS is currently conducting sea trials and research in England's Plymouth Harbor, and plans are to cross the Atlantic this spring. The trip is expected to take about two weeks.

Note: IBM is the parent company of weather.com and The Weather Company.