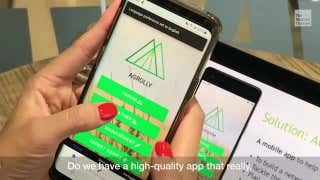 IBM and David Clark Cause announced Agrolly as the winner of the 2020 Call for Code competition, awarding the $200,000 grand prize to the group for its work on an app that promises to help small farmers around the world fight back against climate change.

Built by a team of developers from Brazil, India, Mongolia and Taiwan, Agrolly is designed to connect and support small farmers around the world, especially in emerging countries, where crop yields have been reduced by climate change.

Agrolly combines weather forecasts from The Weather Company and historical data from NASA with crop requirements published by the United Nations Food and Agriculture Organization to provide personalized information for each farmer by location, crop type and the stage of growth. The app gives farmers a chance to close information gaps so they may learn from one another, make more informed decisions, obtain financing and improve their economic outcomes.

The announcement was made Tuesday night at a virtual event, "2020 Call for Code Awards: A Global Celebration of Tech for Good." A replay of the event can be viewed here.

Agrolly is available as an app in the Google store free of charge and is powered by IBM Cloud Object Storage, IBM Watson Studio and IBM Watson Assistant. Another climate change solution, OffShip, finished in fifth place and was awarded $10,000.

Three COVID-19 solutions were also honored. Second place went to Business Buddy, which will receive $25,000. Safe Queue was given third place and $25,000; SchoolListIt was awarded fourth place and $10,000.

Now in its third year, Call for Code is an annual competition in which thousands of developers vie to solve some of the world's biggest challenges by building solutions using open-source-powered products and technologies, including Red Hat OpenShift, IBM Cloud, IBM Watson, IBM Blockchain, data from The Weather Company and APIs from ecosystem partners like HERE Technologies and IntelePeer.

This year's Call for Code consisted of more than 400,000 developers competing in 179 countries, taking on challenges like climate change and the COVID-19 pandemic, which will need groundbreaking solutions that can be implemented in any community, no matter how large or small.

"This year of crisis underscores the need for the world's developers and business leaders to apply the power of hybrid cloud, AI and open source technology to address society's most pressing issues," said Bob Lord, Senior Vice President, Cognitive Applications, Blockchain, and Ecosystems, IBM. "For the third year in a row, the developer community has answered the Call for Code in overwhelming numbers, creating extraordinary solutions powered by open source technology. As a leader in open-source with a long history of driving tech for good, it is incredibly gratifying for us at IBM to see how the broader tech community continues to come together, unified in purpose to make a tangible difference in the lives of so many."

In addition to the cash prize, Agrolly will also receive the necessary resources to test and deploy their app, as well as assistance from The Linux Foundation to make the technology available to developers around the world so it can be scaled and improved.

Call for Code unites hundreds of thousands of developers to create and deploy applications powered by open-source technology that can tackle some of the world’s biggest challenges. Since its launch in 2018, this movement has grown to over 400,000 developers and problem solvers across 179 nations.

For the first time, IBM partnered with the Clinton Global Initiative University to announce a University Edition within Call for Code, which gave more than 53,000 college students around the world an opportunity to help create solutions to fight COVID-19 and climate change.

Pandemap, created by a team of students from UC Berkeley to monitor and manage crowd flow and promote social distancing during COVID-19, will receive $10,000. Lupe, created by university students in the United Kingdom, was named runner-up. Team members from Pandemap and Lupe also receive the opportunity to interview for a potential role at IBM.

Note: IBM is the parent company of weather.com and The Weather Company