Can We Blame 2020's Record Hurricane Season on Climate Change? It's Complicated. 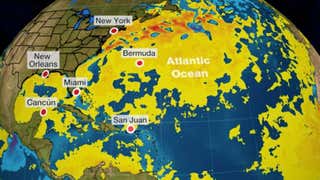 With 30 named storms so far, five landfalls in Louisiana and 12 total in the U.S., it's already well established that the 2020 Atlantic hurricane season is one for the record books.

It also begs the question: What role did climate change play in this year's unrelenting parade of hurricanes and tropical storms?

That’s where the waters get murky.

The wild season in and of itself isn’t clearly connected to climate change, according to Kevin Petty, director of science and forecast operations for The Weather Company, an IBM company.

“It’s a really great question. First and foremost, what I would say is we are experiencing climate change and as human beings we are having an impact on our planet and contributing to different aspects of climate change,” Petty said. “But to actually say that there’s a definitive signal between climate change and what we have seen from the 2020 hurricane season, I don’t think that you can say that. That signal is just not there.”

Both Petty and Bob Henson, a meteorologist and climate writer who also spoke to weather.com about this year’s historic season, pointed out that while several hurricane-related records were shattered in the Atlantic, that’s not the only place storms form.

“What people sometimes forget about is ... there are other basins around the world and we need to think about tropical cyclone activity as a whole,” Petty said.

Tropical cyclone is the scientific term for a type of system that forms over tropical waters with the right sea and atmospheric conditions to become what’s called a hurricane, a typhoon or a cyclone, depending on the part of the world.

There are seven basins where tropical cyclones form. The Atlantic basin, where U.S. landfalling hurricanes almost always come from, is where the records have been broken this year.

The Atlantic basin includes the North Atlantic Ocean, Caribbean Sea and the Gulf of Mexico. Parts of all three of those bodies of water saw record high temperatures from January to October, according to NOAA's most recent global climate report, and nearly the entire basin was above average.

Because oceans soak up excess heat from the atmosphere, their temperatures are rising due to global warming, according to NOAA.

And while climate change may not be directly to blame for this year’s hyperactive hurricane season, warmer water is a key ingredient required for some of the season’s superlatives.

Hurricanes are fueled by warm, moist air that rises from the sea surface. The warmer the water, the bigger the boost for tropical systems and, if other conditions are right, the more power there is for rapid intensification and stronger storms that form later in the season.

“There’s certainly an increasing body of evidence that hurricanes that form are tending to be stronger,” Henson said. “And that’s largely a result of higher water temperatures providing more fuel for the hurricane to intensify.”

Forecasters had predicted this season would be more active than usual, based in part on warmer ocean temperatures.

The winds in three of this year’s named storms – Iota, Delta and Eta – intensified by 100 mph in 36 hours or less. Before this year, that had only happened eight times in 169 years of recordkeeping, according to NOAA scientist and researcher Sam Lillo.

In all, 10 of this year's hurricanes underwent rapid intensification, defined as maximum sustained winds increasing by at least 35 mph in 24 hours or less.

“I think that’s the standout climate change signal with this season,” Henson said.

He added that rapid intensification “really throws a wrench into forecasting” and can hinder how residents react to an approaching storm.

“People often base their decisions on what a storm looks like a day or two before landfall,” Henson said.

Besides being noted for rapid intensification, Iota was also the latest-ever Category 5 storm on record. Including Iota, there’s been seven named storms since Oct. 1, well beyond the typical September peak of hurricane season.

As climate changes, so might the potential for death and destruction from hurricanes. Hurricanes Laura, Isaias and Sally have already been added to NOAA’s list of billion dollar disasters this year.

A recent study published in the journal Nature showed that hurricanes are lasting longer and staying stronger over land because warmer ocean temperatures allow them to store more moisture.

Warmer waters also contribute to sea level rise, which is expected to continue to make storm surge and coastal flooding worse and push those impacts farther inland, Petty said. Hurricane Laura, which came ashore in Louisiana on Aug. 27 as a Category 4 storm, brought storm surge up to 19 feet.

Laura was one of five named storms to make landfall in Louisiana this year. The others were Cristobal in June, Marco in August, Delta in October and Zeta in October.

Laura was the deadliest hurricane to hit the U.S. this year, but most of the fatalities came in a heat wave after the storm. At least nine people in Louisiana died from heat-related illness in the days after Laura, according to the state health department. Nine others in Louisiana and several in Texas succumbed to carbon monoxide poisoning while using generators.

Global warming could make those kinds of scenarios more common.

“It’s entirely possible that the days after hurricanes might tend to be hotter,” Henson said.

This year’s storms left millions of people without power for days or even weeks, some more than once. Hurricane Isaias, which came ashore in North Carolina on Aug. 3 and moved up the East Coast, knocked out power to more than 6.4 million homes and business over the course of four days, according to poweroutage.us.

Tropical cyclones most often form in lower latitudes, where waters are typically the warmest. But that, too, could change as temperatures rise.

“We know that hurricanes get their energy from those ocean temperatures, and when those temperatures are warmer and spatially broader we could see that translate into these more intense hurricanes,” Petty said. “And then those hurricanes may be reaching their maximums at higher latitudes.”

This hurricane season and the factors that drove it will likely be heavily researched by scientists.

He pointed out that technology has improved over the years, making it easier to collect more data on storms. Because of that, Petty said, scientists have to be careful when comparing historical records.

Petty said lessons learned from landfalling systems in particular can help educate residents to be better prepared and more aware, and can also inform planning and development decisions.

“The thing is, hurricanes are not going to go away,” he said. “They are going to be there year on year. But we continue to see population growth, particularly along the coastal regions of the U.S., and we have to think about is that sustainable, and if we do have people in those coastal regions, how do make sure that those regions are resilient in the face of intense hurricanes.”

And as for all those storms that left behind misery in Louisiana this year?

“I think that in this case I would consider it just being bad luck," Petty said. "It just happens to be Louisiana’s year this year, if you will.”