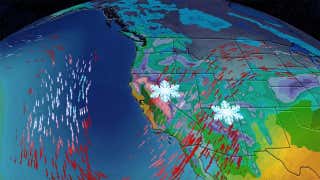 December may trend chillier in parts of the South and East, while remaining rather mild in many other parts of the United States, according to the latest outlook issued by The Weather Company, an IBM Business.

Temperatures are expected to be near or somewhat cooler than average in December in much of the Deep South from Texas to Florida and the Carolinas.

The rest of the country from the West to much of the Plains, Midwest and Northeast is expected to have at least near, if not above-average temperatures in the last month of 2020.

The warmest temperatures, relative to average, are expected from the northern Rockies to the northern Plains and upper Mississippi Valley.

What Changed This Forecast? It's Not La Niña.

Heading into winter, a strengthening La Niña is expected to last through spring and could become strong, according to the latest outlook from NOAA's Climate Prediction Center.

This periodic cooling of sea-surface temperatures in the equatorial Pacific Ocean can influence weather conditions across the globe.

La Niña winters are typically chilly and wet in the Pacific Northwest and northern Rockies and chilly in the northern Plains. Conversely, in the South and parts of the East, La Niña most often delivers warm and dry conditions.

(MORE: Will La Niña Deliver Another Snowless Winter to the Northeast?)

But La Niña isn't the only factor that can shape the atmospheric pattern.

The forecast for early December indicates a large northward bulge of the jet stream over the western U.S. and western Canada, rather than over the north Pacific Ocean, and a pronounced southward plunge over the southern and eastern U.S.

This pattern, known to meteorologists as the positive phase of the Pacific-North American (PNA) oscillation, would bring cooler, wetter weather to the South and East and warmer, drier weather to the Northwest and northern Rockies.

This type of pattern could also bring the possibility of wintry precipitation in parts of the South and storms to the East Coast.

"It's a pattern that more closely resembles something you might see during mid-winter in a strong El Niño," said Todd Crawford, chief meteorologist at The Weather Company.

Crawford said this strong positive PNA pattern is being triggered by warmer than average Indian Ocean water producing more tropical thunderstorms farther west than is typical in a La Niña.

Where these thunderstorms are more numerous and persistent – and where they're more absent – can impact the weather pattern over the Pacific Ocean and over the United States.

As to how long this non-La Niña pattern may hold into December, it's a tricky call.

"We do expect the early month pattern to flip to a more typical La Niña pattern by the latter half of the month," Crawford said.

Highs in December are typically in the 30s or colder along most of the northern third of the U.S. from the northern Great Basin and northern Rockies to the northern Plains, upper Midwest, Great Lakes and interior Northeast.

Along the southern tier, 50s and 60s are common, with 70s in South Texas and the Florida Peninsula.

Frosts and freezes are common in the South in December and occasionally occur as far south as north Florida and South Texas. Lows in the 50s and 60s are typical in central and South Florida.

Lows in the single digits, teens and 20s are the norm in December over much of the northern half of the county.

The season's first measurable snow typically occurs in December along the Interstate 95 corridor from New York City to Washington D.C., from the central Plains to the lower Ohio Valley, and also in the Pacific Northwest to the west of the Cascades, including Seattle and Portland, Oregon.